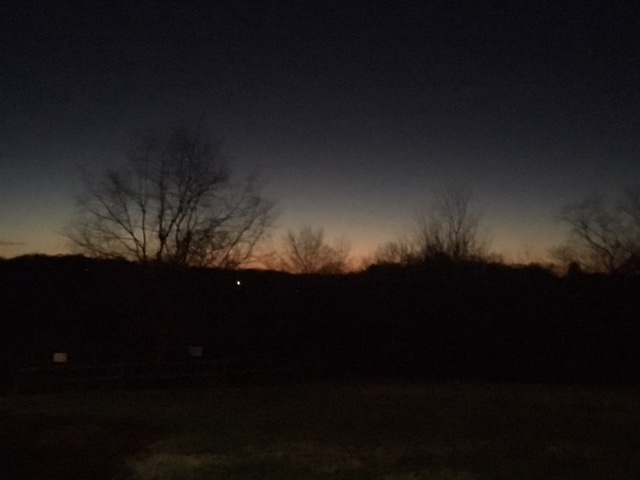 Uncertainty keeps coming up. Recently I was at a closing weekend for a meditation program I’ve been doing over the last year and they asked. ‘how do you view your future self?’My reaction was appropriate for the state of things: ‘I can’t see it.’ Even with the lead up discussion about how the changes we’ve noticed, how our current self informs who we turn out to be in the future, I could not see it. I felt blinded by the cloud of uncertainty. The only future I feel most readily is bleak, even though much can happen before these tumors wreck further havoc on my life.

Any new physical or emotional sensation sets up alarms.The unanswered questions, poor communication, muddled answers, and changing minds, often leaves me in a state of paralyzing unknowing. I’m what in the medical community call a zebra, one with a rare problem with no standard treatment and few options available to me. Even the scans don’t reassure as much as cast doubt on my own telling of a problem or the interpretation of this story or the image itself. It’s all murky.

I scoffed at those who pride themselves in solutions and ‘returns in investment.’ In fact, these offers are really just more painful. To quote a cancer surviving friend after I retold a frustrating encounter, in my case ‘there are no solutions.’ He gets it. Is this despair? Eh, folks keep bring up that they’ve been noticing it. I call it reality. There are skills here and there to make everyday life bearable from hanging out with friends, eating well, good sleep habits, the routine of work, and exercise. The moments in between are tough. Sometimes the moments in the thick of ‘taking care of myself’ are tough.

I poked around for some wise words on this thing known as uncertainty. I came across this talk by Gil Fronsdal that made me wonder if this uncertainty is actually confusion and doubt in disguise. He writes:

The practice of not-knowing needs to be distinguished from confusion and debilitating doubt. Confusion is not a virtue: the confused person is somewhat lost and removed from life. With doubt, the mind is agitated or contracted with hesitation and indecision. These mind states tend to obscure rather than clarify. Furthermore, confusion and doubt are generally involuntary. Not-knowing, as a practice, is a choice meant to bring greater peace.

But lest we take the not-knowing practice too far, Suzuki Roshi said, “Not-knowing does not mean you don’t know.” It doesn’t require us to forget everything we have known or to suspend all interpretations of a situation. Not-knowing means not being limited by what we know, holding what we know lightly so that we are ready for it to be different. Maybe things are this way. But maybe they are not.

As a Buddhist practice, not-knowing leads to more than an intimacy and open mind. It can be used as a sword to cut through all the ways that the mind clings. If we can wield this sword until the mind lets go of itself and finally knows ultimate freedom, then-not knowing has served its ultimate purpose.

What I’ve been having a hard time grasping is “not being limited by what we know, holding what we know lightly so that we are ready for it to be different. Maybe things are this way. But maybe they are not.” I’ve done so much giving providers the benefit of the doubt..only for my knee-jerk concerns and assumptions be confirmed.  The worst is when it’s neither confirmed or denied with continued murky and unresolved questions. I can see how confusion and doubt fill the void of not knowing. There is a solid nature to confusion and doubt, a tight grip on the ego. When it comes to not knowing, it seems to be a release from the ego an all that I identify as the Self.

I can see how it’s a practice, but how can it be practiced everyday? The periodic escape from reality is nothing much but exactly what it is, an escape. It doesn’t solve the day to day realities of living. It’s a constant push and pull.  I guess that will mean more sitting and definitely more homework on making the connections between the mind, body, and the spiritual because I can’t seem to crack this nut.

It’s been a long while since my last post. The first year of being with the 3 (maybe 4) stooges in my neck was a whirlwind of getting the process of being on watchful waiting/ active surveillance set up. These gremlins are indolent and rare so too will be the approach I guess.

I’d like to say I’ve been graceful, but it’s been tough having an “invisible” problem that after a while, other folks forget even exist.

What I have found however,  is a whole new level of vulnerability in myself. It’s been risky (and new) being more open and honest about my situation. There is always a possibility of mistake, loss, and of disconnection, but even with the mis-cues, I’ve found that it wasn’t the end of the world. In retrospect, I noticed at times in this more mindful year, a kind of courage in myself and sense of refuge that before I had never noticed.

In the midst of the chaos and discomfort, I’ve felt glimmers of calm and steadfastness by examining the space around the contraction and identification with all that I notice as between me and feeling free.

Even when I thought I had forgotten that spaciousness…that infinite compassion and grace, when I least expected it, something eventually and unexpectedly inside me remembered.

I had a moment the other day that gave me pause. I was invited to go to the Chinese New Years festival with my close friends and their kids. Their 4 year old has become super comfortable with me (I’m ‘auntie’ at this point) and he was running around a seating area where we were resting. He started saying to me “catch me, catch me” as he ran around. I’d catch him and he’d give me a super tight hug each time I’d catch him.

In that moment the things that seemed overwhelming and contracted seemed to give way to some spaciousness around it. There is something really interesting when I take the time to pause and check in on those moments of genuine care and affection. The ‘loving friendliness’

I show him and the genuine reception that I feel from the kind projects a certain reflective response…where I feel myself giving that metta, the child receiving it, and giving it back.
I think the real value of the ‘body centered inquiry’ / focusing and sitting (no matter how restless it may be) is how the body does remember to check in and take in those moments usually passed off.

It’s the ‘popcorn effect’ of sorts, where one notices the reflex of checking in and of taking in the good without the ‘effort’ of forcing or manufacturing that emotional and bodily memory. One cannot let go by grasping at letting go.

Those good moments, those moments of feeling connected and part of something more expansive is so important during these days where contraction and uncertainty makes it hard to breath and keep perspective.

The core of the practice, I think, is really just remembering and starting again.

I practice. I run...preferably distance. I occasionally sit on retreat and aim to sit every day. I bend and contort at yoga. I write to explore how the mind and the body dance in this finite experience. I write to explore what it means to be present.
Back to top
Mindfulness Awareness

Keeping towards life by being mindful.

My thoughts on living in today's digital world.

Musings from the brain science continuum.

Beyond The Mind
Thoughts After Meditation

The thoughts arrive, so I invite them in.

Life and death and sleeping on the ground